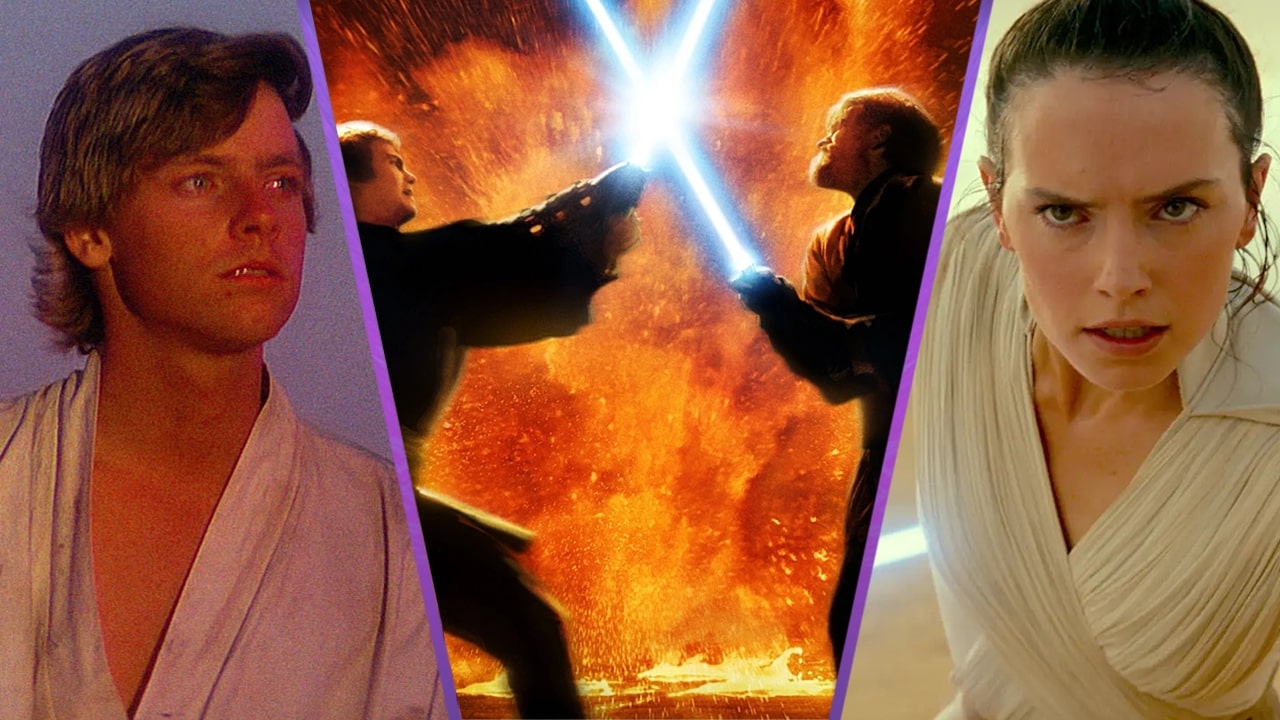 The Star Wars film series is regarded as one of the best movie franchises of all time. Nevertheless, amongst 45 years, 3 trilogies, multiple spin-offs, and 12 theatrical releases in total, some are definitely better than others. With the next film, Rogue Squadron coming out next year, the Andor series coming out this August, and the first Obi-Wan Kenobi episodes out now on Disney Plus, the question of which Star Wars film is best is more prevalent than ever. From worst to best, here are all of the Star Wars movies ranked.

Craving more Star Wars outside of the movies? Have picked up LEGO Star Wars: The Skywalker Saga? You can buy the game right now from £31.95 at the GameByte Shop.

In the second instalment of a film trilogy, it can go two ways: it will surpass the original with its negatives overcome, or it will be a mere bridge of filler between the story’s beginning and end. Attack of the Clones is sadly the latter.

Fundamentally, none of the prequels are good. Nevertheless, Phantom of the Menace and Revenge of the Sith each still have something to offer – either in its villains or particular fight scenes. By comparison, Attack of the Clones has none of this. The Anakin-Padmé love arc (sand and such), overly long chats in the Galactic Senate, and Obi-Wan’s search for answers that leads him to Count Dooku – fumble more so courtesy of an over-reliance on CGI, a dull-yet-clunky script, and lifeless performances by much of its main cast (except Ewan McGregor, obviously).

Even the AotC’s big fight scene featuring a plethora of Jedi and the beheading of Jango Fett, fails to bring the story back to life. Many have been starting to look back on the prequels more fondly, but Attack of the Clones has certainly aged the worst.

In terms of worst Star Wars films, this was VERY close between Attack of the Clones. The only thing worse than Jar Jar Binks – a walking, out-of-place toy commercial – was the fact that The Phantom Menace almost spends its entire first half on a not-so-wizard pod race. What’s more, the young lead of Anakin Skywalker – the child who would become Darth Vader – played by Jake Lloyd, was let down by poor direction and a cringey screenplay. So, the whole point of the Prequel Trilogy itself was off to a bad start.

The saving grace for The Phantom Menace, the entire reason to watch it at all, is Darth Maul. Whenever one starts hearing Duel of the Fates, it’s the John Williams-equivalent of an adrenaline shot to the ears. All of the lifeless and lacklustre events up until the start of the iconic fight between Maul, Qui-Gon Jinn, and Obi-Wan – dissipate completely. Sure, the Sith apprentice’s build-up in the rest of the film could’ve been handled a lot better, but the end result at least gives something to look forward to.

The prequel that’s today looked back on the most fondly. Nevertheless, being one of the internet’s most abundant resources for high-quality meme stock does not make a decent film in reality. On paper, the transformation of Anakin Skywalker to Darth Vader, the long-running deception of Darth Sidious orchestrating the Clone Wars from both sides, and the devastation of Order 66 are three of the most compelling pillars in the Star Wars franchise.

In execution, however, what should have been the prequel trilogy’s magnum opus fails to stick the landing. Plagued with the prequels’ usual problems; tons of rough CGI, horrid pacing, terrible dialogue; Revenge of the Sith fails to deliver on its original promise. Yes, the Anakin-Obi-Wan lightsaber fight is cool to start, but it soon overstays it’s welcome, before becoming hilarious for the wrong reasons.

At the centre of that disappointment is of course the one who the entire story has been about: Hayden Christiansen’s Anakin Skywalker. The Chosen One; a legendary Jedi, a fierce warrior, charismatic, a great leader, a trusted friend who’s not afraid to break the rules, but is a paragon of what’s right and wrong before being heartbreakingly corrupted; is given nothing but a disservice in Revenge of the Sith. Equally painful to witness, George Lucas’ lacklustre writing and direction pairs sourly with Christianson’s poor, creepy-yet-monotone performance.

Done far better in the vastly superior Clone Wars series, being such a likable, epic hero is what makes Anakin’s fall to the dark side so tragic. In Revenge of the Sith, though, this fall is just a whiny brat getting angry and killing some children. We should all be excited to see what Hayden Christiansen brings to his return as Darth Vader in the Obi-Wan series, but the prequel’s sour taste will never fade.

Originally set for TV as the start of the brilliant Clone Wars series, this animated Star Wars feature ended up being the first few episodes woven together for theatrical release. Unfortunately, that fact does show in its pacing – The Clone Wars’ story being a so-so mix between the very beginnings of the namesake conflict, and a conspiracy around kidnapping Jabba the Hut’s son.

As Star Wars stories go, it’s fairly flat in retrospect. That goes for the animation style too. While The Clone Wars series vastly improved its presentation as the years went by, what’s effectively its cinematic pilot holds many scenes which look like they could have used a lot more time in the oven – being more reminiscent of cutscenes from a PS2 game rather than an animated feature film.

Nevertheless, The Clone Wars has a few positives along with its flaws. One being the introduction of franchise-favourite character, Ahsoka Tano. A second, being the debut of the definitive take of Anakin Skywalker – voiced by Matt Lanter – written and performed far more like the legendary Jedi Knight the original trilogy spoke of, and the prequels failed to capture.

In tone and action, Star Wars: The Clone Wars is by far the most superior among films which depict the prequel era. This is not only in terms of performances and the depictions of its characters, but also in action and setting the right tone that would be continued in its series for years to come. It’s just the incompatibility as a full-length film and its aging visuals that’s knocked it down.

The supposed end to the Skywalker Saga, Rise of Skywalker is wonderful, to start, before getting worse the more you think about it. The first time you watch Episode IX, you might have been overwhelmed at its big reveals, emotional moments, and closings of franchise-wide character arcs. Then, as the experience mentally marinates, or you see it again, the cracks start to show – much like on Kylo Ren’s helmet.

The return of Emperor Palpatine – nonsensical. The Knights of Ren – do almost nothing but walk around looking intimidating. Rey being a Palpatine all along – a surprise to be sure, but not necessarily a welcome one. The final battle between the Resistance and the Final Order – one too many steps in well-familiar territory, making it cheesy and predictable.

Aside from still being an entertainingly passable film though, Rise of Skywalker is not without its good parts. The eventual redemption of Kylo Ren as Ben Solo still tugs at the heartstrings. Chemistry between the three leads – pretty sweet with some good-quality humour. The final clash between the two Jedi and grandaddy-Palpatine is pretty fun. Nevertheless, the story to get there – even how it ends, screams nothing but being a messy, panicked retreat to an old formula that strives to undo the risks and bold choices made in The Last Jedi.

Star Wars: Episode IX – The Rise of Skywalker is an alright time, but the more you look back, the more you’ll feel like the story being told isn’t actually organic to what was originally intended. Odds are, you’ll look back at it for what it probably was in reality, a box-ticking exercise in fanservice – to fill as many cinema seats as possible.

Now, we move on to the “it’s fine” category. A prequel to the story of Star Wars’ most iconic heroes, Solo is one of those films where we wondered (and still do) as to why it even exists. Besides money, of course.

Aldren Ehrenreich does a fine job as a young Han Solo. Woody Harrelson is fine as Han’s how-to-be-a-scoundrel mentor. Paul Bettany is fine as the energetic and cold-blooded crime boss – the rare occasions we get to see him. Regrettably, Solo is quite forgettable compared to other Star Wars movies on this list.

On the other hand, once you re-watch Solo without any expectations, there’s a pleasant time to be had. An interesting parallel one might make in Solo is mirroring Han’s origins to Luke’s in A New Hope. Growing up on a backwater world, a young- wide-eyed hero looks to take his ambitions to the stars and make it on his own. The difference here though, is that while Luke’s story in the original trilogy took him down a path of heroism and maturing more as he went, Solo reshaped Han with the mould of reality and betrayal – making him the jaded scoundrel we meet in Episode IV.

A Star Wars film where you wouldn’t have to have seen any of the others to enjoy yourself, Solo is basically a heist film that edges over the line in parts to be a spaghetti western in space. If you needed any reason to watch Solo, it’s Donald Glover’s take on a young Lando Calrissian – not only doing Billy Dee Williams’ in the original turn, but making it more than his own. Solo: A Star Wars Story does start to lose steam in its pacing in its second act, but altogether, it’s still a consistently better film than Rise of Skywalker. It’s just not as impactful as those on the rest of the list.

Find out the rest of the Star Wars movie rankings on the next page….