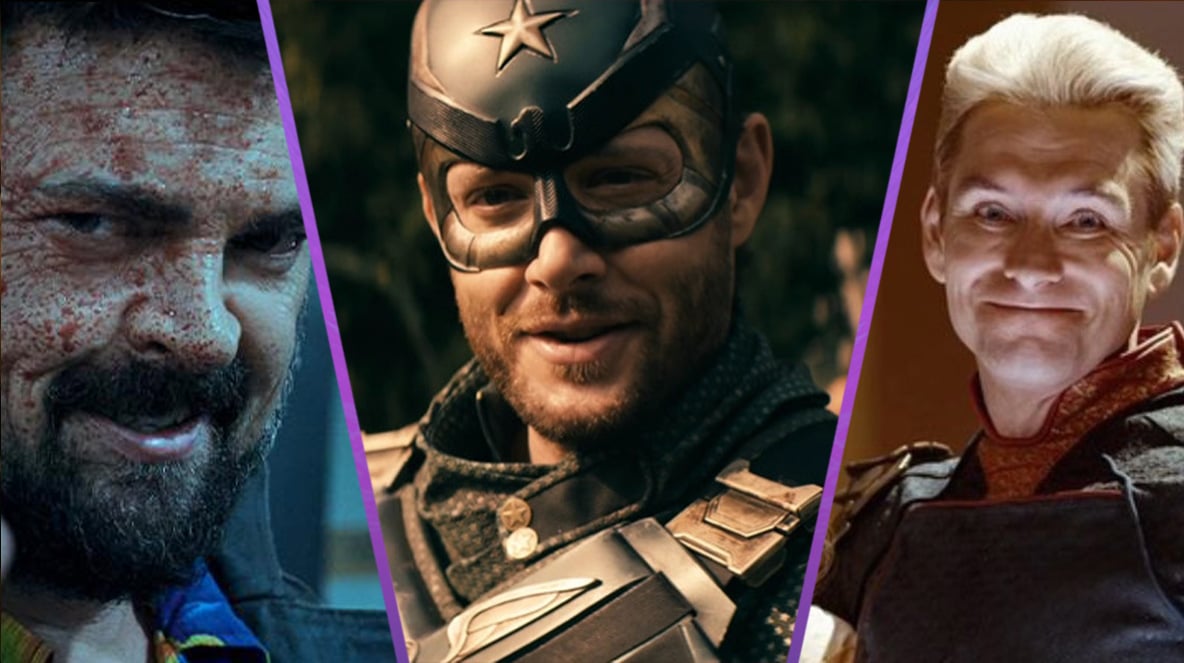 The Boys Season 3 Review – Although adapted from a comic series started in 2006, The Boys series came out of nowhere as an exquisite fit for today’s times – a fused satirical take on the world’s evolved integration of corporate-lead social media, PR, politics, and pop culture.

Along the way, the Eric Kripke-lead show has excelled in all of that whilst pushing the boundaries of superhero storytelling with which season. The very stellar season 2 is very hard to top. Although with some blemishes, The Boys Season 3 is a continuation of the first-rate thrill ride we’ve come to love and more.

This Season 3 review of The Boys is spoiler-free.

Compared to the last season’s premiere, Season 3 kicks off harder and aptly more explosively from its first episode, Payback. Butcher and The Boys are putting the government boot down on corrupt supes, Hughie’s working for politician/unbeknownst-to-him supervillain Victoria Neuman, Starlight’s offered to co-lead The Seven, and Homelander’s keeping a suspicious eye on them all. Vought itself meanwhile, turns last season’s Stormfront-Nazi crisis in their favour, by amusingly working their on-point corporate propaganda wizardry.

As a year of peace comes to an end, The Boys’ third outing shows how settled in his element Eric Kripke has become as showrunner: not afraid to turn the dial on overt sexual themes, gore and violence up to 11 at the first possible moment. Nevertheless, none of it ever becomes gratuitous since as a viewer, we’ve come to expect shrinking superheroes snorting drugs or exploding heads as standard components of that world. Or as the show’s premise illustrates, what we’d see if superpowers were brought to our own. Still, that dial can still get pushed up to even 12, especially in the first half hour – making sure we don’t get too comfortable in what we might be expecting even at this point, but still surprising us in shock, laughter, or both simultaneously.

With that, Season 3 is given more room to explore interesting new ground in its premise and more. One is in The Boys’ main goal: digging into the mystery around the death of former top hero, Soldier Boy, and find a weapon which can kill Homelander. The other is V-24, a temporary version of the Compound V which gives supes their powers.

While the Soldier Boy plot provides a fantastic, deeper insight into the past of Vought’s superhero industry than what we’ve seen before, V-24 makes The Boys look forward in levelling the playing field with amazing results. That’s both not only in what the temporary V lends to the season’s outrageously entertaining set pieces, but hilarious ones as well.

Of course, The Boys as a show wouldn’t be anything without its two leads. Mirroring the breakdown of Season 3’s main plots, Karl Urban and Anthony Starr improve perfection as Butcher and Homelander respectively. While Butcher faces compromising his principles in order to achieve his goals, Homelander is continuously pushed to the brink in more ways than one – most of all, mentally. Watching the psychotic Superman slowly unravel, especially in a captivating, haunting scene mirroring Willem Dafoe’s Green Goblin in Spider-Man, is a testament to the team’s writing and Starr’s skill as an actor that’s more than worth an Emmy.

As said though, Solider Boy is a particular name amongst The Boys’ characters with multiple layers, encompassing many, MANY flaws with the trauma to back it up – contending Homelander for best villain, but still carving a unique presence that breathes new life to an already groundbreaking show. More so, Soldier Boy’s arc blends wonderfully into that of Homelander’s and Butcher’s, making you wonder how the show’s previous two seasons were as good as they were without him. There’s only so many actors which could tick all those boxes, but Ackles plays the American Hero as if he’s done so all his life.

The Boys Season 3 Review – Satire at its best

Like other satirical shows such as South Park or Bojack, keeping up with the times is part of what makes The Boys so compelling in its themes – while interweaving those into the plot to make it all seem natural. Made entirely during the Covid-19 pandemic, any show might struggle to stay relevant, much less one for many parts to juggle like a superhero series. Nevertheless, The Boys is better than ever making jabs at real-world events, from Gal Gadot’s “Imagine” sing-a-long video, to Kendall Jenner’s infamous Pepsi commercial.

The best part of Kripke’s chosen targets, is that even as the years go by past The Boys Season 3, those in-poor-taste moments it makes fun of will be as timeless as the show itself. For the more serious events though, like those around Black Lives Matter, Season 3 rightly takes a more sensitive approach that properly adds to the stories of those involved which still fit in The Boys’ universe.

What’s Bad About The Boys Season 3

The Boys tackles so much in capturing systemic flaws in our society, and often does incredibly well. With a nihilistic story about revenge at its core, it takes on sexism, racism, classism, and much more. The problem in The Boys Season 3 though, is what’s become clear when trying to explore so much with so many players on the board. It’s simply become too overcrowded.

While the main group of Butcher and Hughie is scattered, Season 3 encompasses quite a few extra subplots all in all. As per the season as a whole, some of these are brilliant, like with The Deep and his adventures with an Octopus. Be that as it may, all that jumping around between stories makes the lesser stand out far more, with some not even getting a decent resolution.

One particular sub-story involving Frenchie and Kimiko, you’ll almost forget was even happening by its end. A-Train, although getting some great development for his own arc, does next-to-nothing for the season’s wider story as a whole. Such time could’ve been given to Homelander’s son, Ryan, whose story with adopted daddy Butcher, starts off on a compelling note before being brushed under the rug for far too long.

The most notable trip-up was what Season 3 had done with Black Noir. A key part of the backstory around Soldier Boy, Black Noir is the centre of one of the season’s best later moments. However, that particular story, plus the wider narrative around Soldier Boy himself, just sort of pivots away.

It’s almost as if the sum of parts for the finale was put together at the last minute before realising at the last minute The Seven’s darkly costumed Ninja didn’t fit into the puzzle. As magnificent as the final fight is as well, it also doesn’t meet its build-up when compared to one of the brawls we get in an earlier episode, the beautifully named “Herogasm” – arguably the best of the season altogether. It’s not that the finale is bad. It just falls short of the expectations the season sets overall.

The Boys’ third season is narrowly the lesser of the three, although Jensen Ackles’ Soldier Boy is by far the best addition to any show in years. While key parts of the series are still in their prime; adding depth to its characters, interwoven comedy, and some incredible bloodbath action scenes; The Boys Season 3 has unfortunately become an example of what happens when a series explores too many narratives. Not only that, but when you’ve not got enough characters or time to explore them all properly.

Nevertheless, The Boys Season 3 hasn’t lost what made the show and its story so fun and engrossing to begin with, making it absolutely not one to miss out on. Hopefully with a leaner selection of sub-plots to juggle, the now-confirmed Season 4 will make the very small jump needed back to perfect form.

Check out reviews, news, and guides, along with more news on The Boys, all here at FragHero.